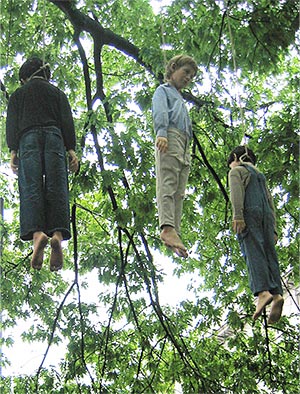 Hanging Children uit 2004: “cattelan chooses the most ancient tree of the city to transform this collective hallucination in a realistic representation. as for magic, like in a medieval tale, three children hang on a tree and watch the truth with their eyes wide open.” (Link)

“MAURIZIO: There was the time I had to go to the police to tell them that someone stole an invisible sculpture from my car.
BOB: I’ve never heard about this. An invisible piece?
MAURIZIO: I was supposed to have a show at a gallery, and I didn’t really have anything for them …
BOB: … and you didn’t know how to tell them?
MAURIZIO: Yes, so I decided to report that a sculpture had been stolen from my car.”

“BOB: Didn’t you once steal someone else’s work, and then bring it to the place where you were having your show?
MAURIZIO: Yes. This was more about displacement. I thought it was interesting to move one place completely into another.
BOB: So you broke into the gallery?
MAURIZIO: Yes, we broke inside at night.
BOB: They didn’t have an alarm?
MAURIZIO: No. [laughs]
BOB: Whose work did you take?
MAURIZIO: Actually we took everything from the gallery …
BOB: Like the fax machine and all the stuff in the office?
MAURIZIO: Everything. We rented a van, and just filled it up.
BOB: This was in Amsterdam?
MAURIZIO: Yes, at de Appel. They wanted me to do a piece in a week. But I’m not used to working so quickly. So I thought the best way to get something that fast was to take the work of someone else.
BOB: That’s a new take on the readymade.
MAURIZIO: Well, when you don’t know what to do …
BOB: But didn’t the people at de Appel ask, “Where did all this stuff come from?”
MAURIZIO: The story finished quickly, because the police came and there were problems …
BOB: Were you arrested?
MAURIZIO: No. This is why I did the piece in Holland.” 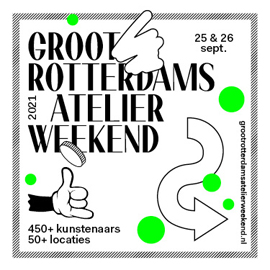 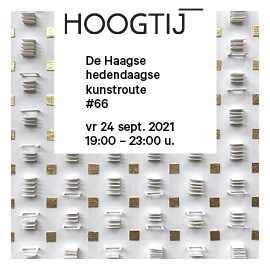